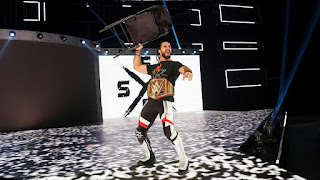 WWE Monday night raw is going to be the epic one because we will see Seth Rollins as a universal champion in the ring and someone gonna challenge him for his title Or maybe the fiend Bray Wyatt will Appear For a Rematch.
Crown jewel is a few weeks away and wwe makes crown jewel a big event as  Wrestlemania. wwe will be trying harder to get more audience retention at the crown jewel, hence we will be seeing on tomorrow’s WWE Monday night raw.
Quick Preview
1) We Got Our new Champion Charlotte Flair And We will see Some segments Going On.
2) Whos Next For The universal championship.
3) We, Will, See Some Returns as Crown Jewel Matches are too be announced.

Wed Oct 16 , 2019
Update on Bobby Lashley and Lana’s storyline Lana and Bobby Lashley were the most talked about thing when they returned a few weeks ago everyone was interested in seeing where this was going and we finally got out first development in the story on raw. We saw Lana and Lashley […]