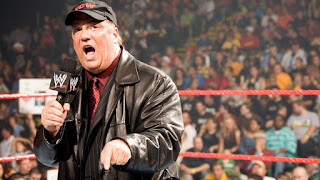 Brock Lesner is been missing for 5 weeks after the biggest event of SummerSlam. at SummerSlam, the match between roman and brock lesner was history creating the match, and after the match, WWE  witness a new universal champion roman reigns but that was not clean as WWE fans where tweeting, by that way of thinking brock lesner should return for a rematch for the universal title

What next for Paul Heyman!

as brock is not available for raw, Paul Heyman will find a new guy this time the man is Kevin Owens. as on raw we saw that Kevin Owens loss to Seth Rollins for intercontinental championship. then he declared that he quit. but on next episode of raw Kevin Owens returns and attack Bobby Lashley and again bobby Lashley trying to fight back but jinder mahal also was there and then Kevin Owens shut him up with his massive superkick. then he was there to attack the shield, something WWE trying to find the best opponent for Kevin Owens who will dive it into hell in a cell, rumors are especially of Bobby Lashley. as Kevin Owens attack him he will surely come back and get his match.
Rumors of Paul Heyman!
plenty of rumors were there that Kevin Owens will return with Paul Heyman as his new guy, but this can happen on next Monday night raw. as WWE finds the best way to amaze WWE fans, they will definitely try Paul Heyman with Kevin Owens, but only Kevin Owens? no, there are many superstars that can arrive as new Paul Heyman guy like jinder mahal as now jinder Mahal is just a raw part, its time to make a new guru as Paul Heyman.this we will able to find out in some more weeks.

WWE Rumor: Will Shield Dominates everyone in Backstage?

Mon Sep 10 , 2018
WWE Rumor: is WWE making Brawn strowman heel? ​ Monday night, raw WWE experienced the new era of the shield came in reunion, that was the best main event of raw 2018, then after the reunion, they attack brawn strowman and gave him the forceful triple powerbomb. therefore on 27th August raw, we find out how brawn strowman can tackle the situation by playing mind games on the shield. For the universal championship, there […]