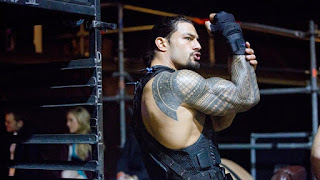 Roman Reigns was set to return on Monday night raw Feb 25th for his update on leukemia. Roman Reigns left WWE in October 24th, 2018 and relinquish his WWE universal championship.
Roman reigns return to Monday night raw with all the fans cheering him, then roman reigns get into the ring with some smile on the face and thanks to all the WWE superstars and the WWE Universe for believing in him and supporting him till his return
then roman reigns came to the point saying that I’m back On remission, by that roman reigns sentence the whole WWE crowd was mad of cheering to the big dog. and then roman reigns announces that he is back to WWE and its time to get back his yard now.
Join us for all WWE News, Rumors, facts.

Thu Feb 28 , 2019
WWE Rumor: Roman Reigns To Replace Seth Rollins at Wrestlemania 35 As We Know Roman reigns Return to WWE After Defeating Leukemia roman reigns was out from WWE from past 3 months. On October 24th roman reigns announced his leukemia disease and relinquished his universal championship. On The latest episode […]