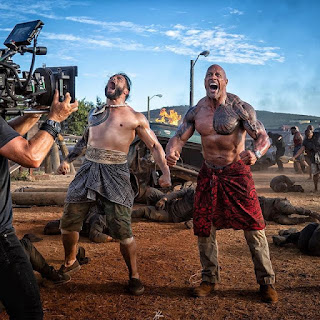 As it was revealed today By The Rock aka Dwayne The Rock Johnson That Roman reigns will be working with him as his first film debut.

The Rock Posted On Instagram
The brothers’ roar.
A Lil’ HOBBS & SHAW exclusive.
Good times droppin’ sweat and spillin’ blood with my family, @RomanReigns who’ll be playing my brother in our FAST & FURIOUS UNIVERSE.
I’m very proud of his focus, effort and authentic performance in our movie for his very first time on film.
I’m also very grateful to spend this quality time with my cousin here in the islands as he takes life one day at a time to recover from leukemia.
His perseverance and humility battling this challenge have inspired our entire family as well as millions around the world in our beloved @WWE Universe.
Can’t wait to see the “Big Dog” return back to the ring – his positive & focused mindset to return is straight up next level.
Til’ then, this sacred Samoan 🇼🇸 ground you stand on is nourished with our ancestor’s blood.
Today, we nourish it with yours.
This is great news for WWE fans that Roman Reigns will be seen this summer in theaters as an actor and we will hope that he will be in the WWE ring Soon.

Wed Jan 30 , 2019
Dean Ambrose is leaving WWE, But Why? Dean Ambrose was a 3rd man That help The shield To become dominant in WWE . and after in 2014, Seth Rollins Turn heel the major part was played by Dean Ambrose. And the rivalry between Seth Rollins and dean ambrose was greatly […]